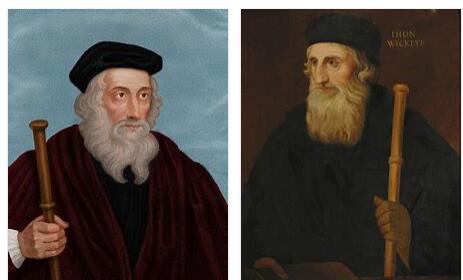 Wilhelm von Ockham (about 1285-1347)
English philosopher and theologian. Wilhelm von Ockham was born in Ockham around 1285 and trained in the Franciscan order. He studied theology at Oxford University. He left behind writings on natural philosophy and theological as well as works on logic and politics. Von Ockham is considered one of the leading exponents of nominalism.

Matthew Parker (1504-1575)
Archbishop of Canterbury and Reformer of England. Parker was born in Norwich in 1504. He studied at Cambridge and became a deacon, then a priest in 1527 and finally Archbishop of Canterbury in 1559. During his career he was strongly influenced by the so-called Cambridge Reformers, whose chaplain he was appointed after Anne Boleyn was put on the throne. Parker died in Lambeth in 1575.

Nicholas Ridley (c. 1500-1555)
Bishop of Rochester and Anglican martyr. Ridley was born into a distinguished family in Northumberland around 1500 and studied at Cambridge. As a priest-professor he temporarily moved to Paris and a few years after his return became the highest proctor of the University of Cambridge. In 1547, Ridley was ordained Bishop of Rochester. He was executed under Maria I in 1555 – along with Hugh Latimer.

Lord Robert Runcie (1921-2000)
Archbishop of Canterbury 1980-1991. Robert Runcie was born in Liverpool in 1921 as the son of an electrical engineer. He studied Ancient History and Literature at Oxford during World War II and volunteered for combat. Runcie became a priest in the early 1950s. In 1980 Margaret Thatcher named him Archbishop of Canterbury. Runcie wed the Prince of Wales to Lady Diana in 1981.

John of Salisbury (ca.1115-1180)
theologian, scholastic. John of Salisbury was born in England around 1115 and received his training from the famous Pierre Abélard in Paris, who made a significant contribution to making Salisbury one of the most popular theologians of his time. He is also seen as a thought leader in the English Enlightenment. One of his role models was Aristotle. Von Salisbury died in Chartres in 1180.

Anthony Ashley-Cooper, 3rd Earl of Shaftesbury (1671-1713)
moral philosopher, politician. Anthony Ashley-Cooper was born in London in 1671 and grew up in the famous Exeter House. As a philosopher, he played an enlightening role that contradicted Hobbe’s philosophy of egoism. The essence of harmony was of central importance in his views. Its influence on subsequent generations is enormous, so it was very well received by Leibniz, Herder, Diderot and others. Ashley-Cooper died in Naples in 1713.

William Tyndale (c. 1448-1536)
priest and scholar, translator of the Bible into English. Tyndale was born in North Nibley around 1448. He studied at Oxford and Cambridge. His translation of the Bible was most widely used to date, due to the invention of the printing press. He introduced entirely new words into his mother tongue. However, the work was banned in England. Tyndale was executed in Vilvoorde in 1536 for his translation.

Chad Varah (1911-2007)
clergyman and founder of the Samaritans (telephone counseling). Varah was born in Barton-upon-Humber in 1911, the first of nine children of a priest. He studied at Keble College in Oxford, among others. In 1953 he set up the Samaritans, a telephone counseling service on a non-clerical basis. Between 1953 and 2003 he was also the church leader of a London congregation. Varah died in Basingstoke in 2007.

Baroness Mary Warnock (born 1924)
philosopher and writer of existentialism. Warnock was born in Winchester in 1924, the youngest of seven children to a wealthy family. She studied at Oxford, then became an honorary member and taught philosophy at the university. In 2008 she was charged with campaigning for euthanasia in people with dementia. She also takes the view that religion cannot be the basis of political decisions.

John Bainbridge Webster (1955)
Anglican theologian. Webster was born in Mansfield in 1955 and studied in Cambridge. He worked as a chaplain and tutor at Durham University, and later as a professor in Oxford and Aberdeen. He writes recognized writings in the field of social, historical and moral theology.

Thomas Wolsey (circa 1475-1530)
Cardinal and Archbishop of York and founder of Christ Church College in Oxford. Wolsey was born in Ipswich around 1475 and studied theology at Oxford. This was followed by ordination, doctor of theology, appointment as a Roman Catholic cardinal and finally the post of English Lord Chancellor. For a long time he was considered the most powerful man in England until he was charged with high treason. Wolsey died in Leicester in 1530.

John Wyclif (Wycliffe), (about 1330-1384)
philosopher, theologian and religious reformer. Wycliffe was born in Yorkshire around 1330. He studied at Oxford and later headed Balliol College. In his teachings he took the view “power only through grace” and denied the Pope his claim to political power. The people admired him, the rulers persecuted him. Wyclif died after suffering a stroke in 1284.

Climate of Saint-Pierre and Miquelon

Climate of Sovereign Base Areas of Akrotiri and Dhekelia